On the use and abuse of Technology and its Management from the perspective of an academic at UCL specialising in Project Management, Systems Engineering and Space Science/Technology.

Back from a short break in not-quite-as-hot Cornwall, after a blazing week in which there was a substantial UCL/MSSL stand at the sweaty Farnborough Air Show. Some of this featured the newly established Photonics Knowledge Transfer Network, some of it the activities of MSSL in general, and some of it the activities of our Technology Management Group and the UCL Centre for Systems Engineering. Here's the UCLse poster on the left (I'm quite proud of the background photo):

The value of this activity to us comes from being visible to the community (we were placed in the International Space Pavilion), and at the same time as being in a good position to look closely at other activities and possible partners for future collaborations. To catch fish, you have to go fishing.

On my routine trawl through news items, I saw that Sarah Bell's MSc in Environmental Systems Engineering made it to UCL News. Disclosure: this MSc is linked to our MSc in Systems Engineering Management. The second photo above is from the launch event for the MSc.

The spin this time was the association with tribewanted, and how students on the MSc would get involved in studying enviromental problems on this island community. Sounds like a set of extreme projects as well. It would be good to see how groups of people – presumably untrained in PM skills – organise themselves in that situation, and to write about it from a formal PM perspective.

Sarah also admits to having a blog, Cyborg Engineers, which despite being rather dormant looking, brings us the zeitgeisty concept of "Dilbertian frustration with management". She doesn't specify whether as subject or object of the verb!
Posted by Matt at 7/31/2006 09:49:00 am No comments:

When do you use a proper diagram?

It's like I keep saying, it depends. If you want to tell people about something, and don't want no argument, you should probably draw it up neatly in a language they understand.

Visual grammars are somewhat mysterious though, as the following example will I hope show.

If you want to work something out visually, a modeller is going to want to use a live, computer-based representation of their problem. The richer the better as far as a modeller is concerned. They are happy to learn the details and spend days playing with the configuration of the diagram. Being a proud sort, they will bring it to the meeting and say look at this, play with it. I've seen instances of this where the above-average-intelligence audience have been interested in the problem, wanting to contribute, but have been struck dumb by the strangeness of the notation. Uh dunno, you do it mate report back when it's finished. Next Agenda item please.

Tragic. The investment in learning visual language is never made properly.

That's why I like stealthy visual grammars, that emulate the anything goes world of the flip chart and sticky note. They are much more amenable to debate and contribution.

If you want to involve people in a group, you need a visual language that's approachable by them. You can't just say "oh it's UML, get with it", you have to make allowances.

Take a look at Nick Duffill's these two diagrams from the Beyond Crayons blog (also refers to Patrick Mayfield's little article on visual mapping in Systems Thinking).

See how in Nick's comparison, the second diagram looks more rigid, and less likely to be argued with. He also makes the point that the tree-like diagram obviously goes somewhere (the Outcome) rather than its wiggly predecessor.

Incidentally, he calls these Open Systems and Closed Systems but I don't think that nomenclature is quite right. He's referring to whether the system state evolves as a whole or whether things keep going forever. Essentially one diagram shows forces, and no state, and the other shows some forces, and a big change of state. Different objects, as well as a different grammar.

Very often these models are faulty on first presentation, but somehow the apparently finished state - signalled by the neat lines - is off-putting. The reaction could be "that's a bad model take it away" rather than "you missed this bit out HERE let me fix it".
Posted by Matt at 7/18/2006 12:18:00 pm No comments:

The J Curve: The Dichotomy of Design and Evolution

Fascinating post on fundamentals to do with Design as we know it vs. emergent paradigms such as GA-driven problem solving.

The J Curve: The Dichotomy of Design and Evolution

Steve Jurvetson is mostly taking about how to do it, how to get a big system off the ground using parts that are designed and parts that are brewed. The interfaces, aargh the interfaces. Every surgeon knows that evolution gives you beautiful functionality but messy interfaces.

Steve presents these two as divergent paths, but I think I'm more hopeful for success in integration of the two styles of technology. I'm not sure why, but I think Layers and Architectures are significant and helpful.

We could add to this another dimension of systems engineering - the Verification/Validation stage. Many of the patterns that have been establisehd in systems engineering rely on transparency of design. Given an evolved system, or even a designed system containing an evolved system, how do you verify the integrity of the system if you can't inspect the drawing or the code?

Or what if the system itself evolves in use, such as an automonous array of communications routers, or a fleet of spacecraft? How can the safety of the users be assured?

We need to look at tending gardens, using animals and employing people for models of how organisations use evolved resources in systems. Track record and training will be as important for machines as it is for people and organisations.
Posted by Matt at 7/14/2006 09:09:00 am No comments:

In this post (and its predecessor) David J Anderson speculates (in his Agile Management blog) on how Lean ideas and product architecture play against each other.

It's pretty obvious I think, that when you have a team of organistions working on a product, some of the decisions about the architecture and interfaces of the product are determined by the organisational structure of the team, and that a different set of partners working on the same problem would develop a different architecture, for management rather than technical reasons. This is entirely legitimate by the way, and working out the best route is part of the function of all technical managers. Sometimes the organisation will be shaped by the product, and sometimes vice versa.

Anderson's thoughts are directed toward Lean, or Agile development, and how that imparts further gradients onto the decision space.
Posted by Matt at 5/15/2006 11:28:00 am No comments: 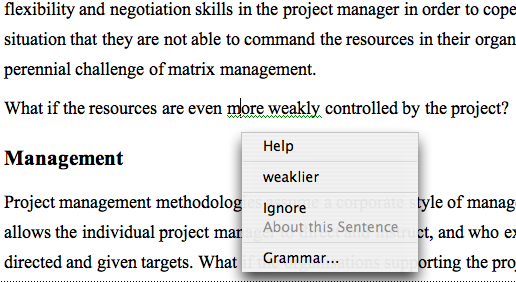 See that? Evidently Word can't cope with too much irregularity. Which is what this paper is going to be about: Extreme Projects, what they are, and how we might manage them.
Posted by Matt at 4/28/2006 03:56:00 pm No comments:

I'm becoming involved in Requirements Engineering (RE), as it is now known, on numerous fronts, including a module for our MSc in Systems Engineering Management. This relates in many ways to the front-end management issues that I've written about here previously. Consequently, I'm in knowledge acquisition mode.

Our requirements tutor, Anthony Hall, hopefully won't mind me mentioning that Ian Alaxander's site is packed with great book reviews including many on RE.

Why hadn't I seen this before?

Edward Tufte's forum on visualisation issues, including Project Management graphics and the terrible Gantt chart. I scoured the latter for inspiration on the strategic project visualisation idea – previous post. Lots of ideas but mainly too tactical. 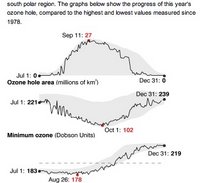 Check out Sparklines "word-like display of data": nice example here at NASA Ozone Hole Watch (that sounds so much more urgent than Ozone Layer Survey). They say this is sparklines-inspired rather than the true in-text sparklines.

Here's a more on-message sparkline from a company called Bissantz, who do software to create Truetype fonts for this.

The latter also claim to implement yet another bright idea I had in the bath – audible data playback! Should we call it audioisation?

Several of the Tufte forums are going straight into the feedreader. For one thing, I'll know when his new book will be ready.
Posted by Matt at 4/04/2006 12:50:00 pm No comments:

Strategic thought about future projects needs to be accurate, but because of the innate uncertainties the area is resistant to usable models.

Why model strategically? I'm looking for some way of preparing thought at the stage of the business case (the full one not the bean counter's profit statement) or the research proposal. We need to know what's connected to what, and what gaps exist. We need exact knowledge of uncertainty. We don't want to commit to tasks and sequences yet, but we do want to shake out the structure of organisational relationships with the underlying technology.

The tactical level is well-trampled, principally by the Gantt chart. For discussion of some of its deficiencies and some possible alternatives, we'd better Ask Tufte. However, the strategic, beginning level of projects is airy fairy whiteboard stuff, the fuzzy front end.

Snagged from a somewhat random US army document about process modelling.

This is the commonly used ICOM model, a Lego brick of many process model formalisms. I'm trying to think how it could be used in a strategic-level project modelling system.

Inputs and Outputs of generic activities are obvious elements to model, but we don't want to imply that a task is done once. Rather like a diagram of body parts, we want to infer circulation and iteration of knowledge and materials between connected parts.

Instead of Mechanisms and Controls, we can use the vertical faces of an activity node to represent Resources and Constraints respectively. We can utilise this in a mapping scheme to show contributing organisations arrayed along the base of the diagram and customer/external organisations in the upper part.

Ideally I'd like to connect this to hard data (tables) about the connectedness and certainty of each of the elements. I'd like to take the drudgery away from the drawing aspect, and have the ability to do basic traceability and completeness analyses on the strategic model.

After a long gestation, the APM have published an updated Body of Knowledge. It's much improved over the previous version, and contains helpful notes and references on a wide range of project management topics. Material on Strategic management of projects, Issue management, Technical/Technology management, Processes, Governance, Learning and Ethics have all been added now, and the majority of the rest upgraded and updated. In other words, it's useful. The only snag is how you get hold of it.

The APM Body of Knowledge 5th edition has been written by practising project managers for practising project managers. It is designed to support frontline practitioners, consultants, advisers, senior managers in project-driven organisations, trainers, students, researchers, authors, publishers, librarians, information specialists and knowledge managers. It is used by the APM as a foundation for its membership, professional development and knowledge services.

You can have a taste of some of the underlying definitions on the main APM website (PDF here), but basically they are charging money for the main dish.

I personally think they should be propagating this quite freely, since their membership route is now linked to an examination of this knowledge. I suspect many training providers may amortize the cost of the publication into their fees!